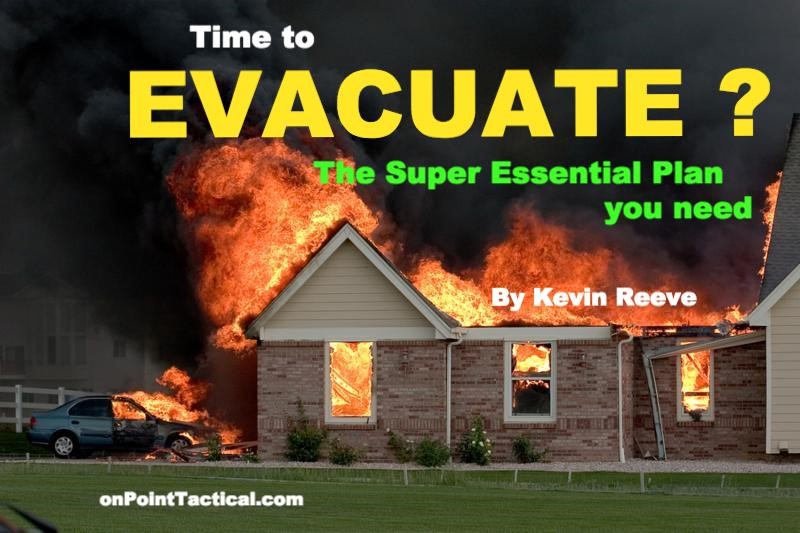 With fire season in full glory in California, many people are being forced to evacuate with little notice.  I do an scenario in the Urban Evacuation class where I give the students 10 minutes to come up with a list of the things they would take with them in event of a forced evacuation.  They must also list the location of the items in their house.

It is an eye-opening lesson for them.  Most have little idea what they would gather, less idea where it is.  If you add the stress of an actual evacuation, the ability to focus is further impaired.  People make terrible decisions. Things get overlooked and forgotten.

People only see what they are prepared to see.

What do you take?  How do you prepare for an evacuation in advance?  The obvious answer is to make lists of what you will grab and then collect it and store it in an easily

What is the most critical thing to take?  Obviously, the thing that is hardest to replace.  My brother lost his house to a fire. It burned to the foundation.  When I asked him what he regretted losing the most, he said that his family photos and heirlooms were what he missed the most.  Not what I was expecting, but after consideration, it made sense. So I started thinking about what meant the most to me, what I would want to take.

I break it into two categories, the practical and the sentimental.

The Practical: things that are essential to preservation of life and wealth preservation.

-Shelter – either a tent or some other form of protection from sun, wind, and rain.

Sleeping bags or blankets to keep you warm in cold weather.

-Water – a few gallons of stored water in one gallon containers for easier transport.  Plan on at least two gallons per person. Additionally, I would recommend a water filter to assist in replenishing supplies.  Water is heavy to carry and a filter allows you to carry less.

-Fire – maybe not a campfire, but a stove or some other means of cooking.  Other means of staying warm, like a coat, hat, gloves, etc.

-Food – freeze dried meal are the lightest and easiest.  But canned food works great too, it is just heavier.

-Protection – a weapon or two to protect against two-legged predators.

-Computer hard drives – this is less important than it used to be with cloud storage, but if you run a business from home, you might really need that laptop.

The Sentimental: Items with high emotional value; things that are not necessarily life-preserving, but that you won’t want to lose.

-Family photos – with the option of digitizing old photos and the prevalence of digital cameras, this may be less important in the future.  But right now I have a few totes with pictures that I could never replace.

-Outdoor toys – quads, snow machines, boats.  Usually insured and not worth risking your life for.

Decisions Decisions: there is no way to take it all.

In our given scenario, you have two vehicles to drive out, a mid-sized car and an SUV.  Given the space restrictions, you won’t be able to take everything. So now you have to make some decisions.

Create a staging area behind the vehicles so you can make decisions about what to bring.  If you have organized your essential gear in advance, it can go right into the vehicles. This assures you that you will have what you need to survive.  Then you have to make some very fast decisions about what parts of the emotional pile you want to save. Size and weight will be an issue.

Checklists:  I don’t have a brain, I have a checklist.

I have a love/hate relationship with checklists.  I dislike the effort and time required to make them, but I hate the inconvenience or even tragedy that follows when I do not have what I need, even more.  As we age, memory and recall decline, whether we recognize it or not. Lists and reminders become more and more important.

The advantage of a checklist is that you have already made the decisions about what to take.  All you have to do is gather it. It really frees your mind to think about other things like the disposition of friends and family members.

So I sat down and created a list that will allow me to prioritize my packing if I have one car, or the SUV, and if there is time, the trailer.

The other key to evacuating safely is that the items on your “must have” list be gathered and packed for travel.  I use plastic totes to keep stuff together. Admittedly, some stuff cannot be pre-packed because it is in use. But I can save a lot of time by packing most essentials in advance.

My student and his family were faced with evacuation when a wildfire burned down homes on an adjacent street.  Their evacuation bins were prepped and stored in the garage. After the alert by the sheriff, they quickly loaded the cars and drove out of the neighborhood right behind the sheriff’s vehicle, much to the amazement of neighbors who were packing in a frenzy.

Waiting to do any of this until the fire’s at your door invites a bigger tragedy, on top of the disaster of potentially losing your home, let alone your life.  Let me emphasis, none of your possessions are worth dying for.  Forsake all if necessary to preserve life.

Coming up:   GO: The Actual Evacuation

Kevin is also an expert in military Scout Skills, land navigation and advanced outdoor survival skills. onPoint Tactical, LLC has been in operation since 2004.