Why City Size Matters for Survival 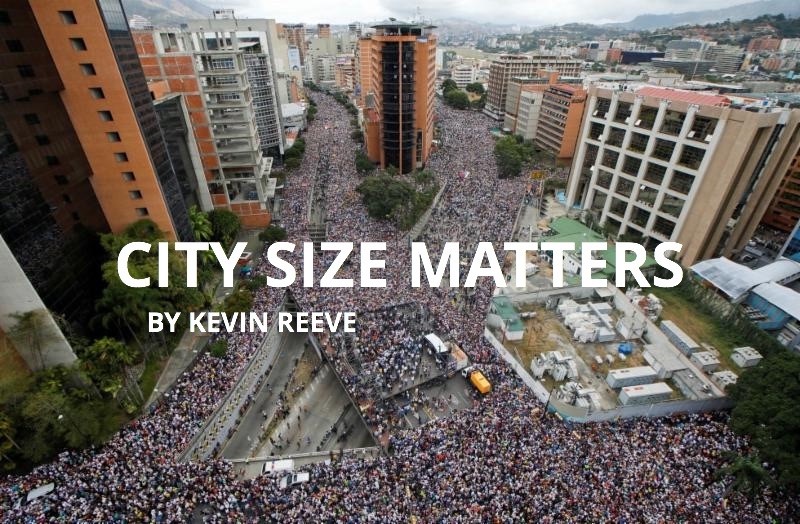 Why City Size Matters for Survival

I have been working to come up with a model that accompanies the model of social breakdown, but in different sized populations.  The five phase social breakdown model seen in many countries like Haiti or Somalia states that after an event the social structure goes through several phases.  First Cooperation, followed by Self-interest, followed by Anarchy, then Tribalism, and finally, Warlordism. These phases are outline in my previous article, 5 Stages of Societal Breakdown & Resilience.

I have been trying to imagine a scenario that could happen in the United States.  I can see a city such as Los Angeles going through these phases following a Black Swan event.  It is a relatively easy task to imagine LA going full Warlord fairly quickly.  Look at LA County. 10,000,000 people. Ten Million. All totaled, 22,000 sworn police officers.  And 180,000 gang members. Sounds like a recipe for a quick descent.

So in an attempt to make sense of how different sized cities are affected by an “event” (something that has the potential to disrupt the delivery of goods and services), here are predicted effects by population size of cities.

One of the major changes in population density and location has been the centralization and growth of populations along the shores of oceans.  It is estimated that 80% of the world’s population lives on a coastline. This has created huge metropolitan areas that are essentially one city.   The eastern seaboard takes in NYC, but stretches from DC to Boston with densely populated areas. They can all be considered part of what I will identify as population centers over 1 million people.

In the delivery of goods and services.  Trucks, trains, and shipping are disrupted.  Large numbers of people are now competing for limited resources of water and food.

In addition to transportation, utilities would be disrupted.  Power failure, disruption to the water supply, Phones, cable, and cell service disruptions. Sewer and sanitation systems breaking down.

Demand will far outstrip supply.  LA County has at last count around 93,000 hospital beds available, 70% of which are occupied.  That means a surge capacity of less than 25,000 beds for a population of 10 million. Hospitals depend on regular delivery of supplies and have, at most, 2 days worth on hand.  If power is lost, hospital efficiency and effectiveness will be compromised, even with backup generator in place. Hospitals have a 3 day supply of diesel fuel, with an expectation that more will be available, but there are other factors that can compromise funtion.

In an email interview with ProPublica, [Dr. Arthur] Kellermann elaborated: “I have no doubt when the hospital assured the [NY] Mayor that their backup systems were ready, they believed they were. They were wrong. What I find most remarkable about this story is that [more than seven] years after Hurricane Katrina, major hospitals still have critical backup systems like generators in basements that are prone to flooding.”

Immediately after an event, local governments may try to establish martial law, institute curfews, confiscate weapons, fuel and food.  But the police will be so badly outnumbered that success here will be short-lived.

With the disruption in the delivery of goods and services will come looting of food stores.  Law enforcement will be stretched to the max and many will call in sick in order to protect their own families.  Calls to 911 will go unanswered. This will exacerbate an already incendiary situation and result in the slide to anarchy. In the power void left by the police, street gangs will take over, meting out street justice and systematizing the looting process.  Violence would be the norm.

Many of the same effects are likely in cities of 500,000 but perhaps at a slower rate. We are talking about cities separated from the megalopolises on the coasts.  Cities such as Atlanta, Tucson, Milwaukee will experience similar effects, but perhaps in a slower descent.

Disruption in the delivery of goods and services.

Trucks, trains, and shipping are slowed, but moving.

Transportation would slow but power would remain functional, water sources would still be available, food delivery would eventually end, but may continue for a few days.

Hospitals may be crowded with  patients, but can remain functional as long as the power is on.  They will run out of supplies in a couple of days however

Immediately after an event, local governments may try to establish martial law, institute curfews, confiscate weapons, fuel and food.  How long martial law will be effective depends on how hungry the people are.

Law enforcement will be stretched to the max and some will call in sick in order to protect their own families.  Calls to 911 will be answered for a time. The slide into anarchy may be delayed for a few days, but as more and more cops fail to report for duty, and opportunists realize the fragility of the situation, looting will begin to occur.

Cities of about 100,000 that are separated from the coastal megalopolises  This would be cities such as Billings, MT, Peoria IA, Wichita Falls KS, St George (UT).  Smaller and more isolated cities would see some of the big city problems, but for the most part can remain operational. They will eventually have:

Disruption in the delivery of goods and services.

Trucks, trains, and shipping are disrupted.  Goods already in the pipeline will be delivered, but shipping will eventually stop.

Most utilities will continue to function for an unknown period.  Power may be disrupted by an overall grid failure. Restoration will depend on proximity to power generation facilities.  Sewer and water will be largely unaffected. Communications will still function locally.

There may be an overflow of patients at the local hospitals, but the overall function will continue.  The pivotal factor will be supplies. Once they run out, the medical professionals will have to improvise.

The rule of law will continue to be enforced.  Local government may implement martial law until the crisis passes.  There may occasional looting, but looters will be dealt with harshly and it will not spread.  Dispatch functions will continue. Police will be stretched thin.

For towns of less than 25,000 and away from the coasts, it will take some time for real effects to be felt.  Infrastructure disruptions would likely be limited to local power outage until local sources are brought back online.  For example in my area, the utility company has two hydro electric power plants that supply the local townships. Many rural communities use septic systems and have local sources for water. My community has three wells and three water storage tanks.  Plus reservoirs and rivers nearby.

The smaller the community the more self sustaining they tend to be.  I live in such a community, and we have local sources of food.  Many heat with woodstove. It will take some time for the first order effects to arrive in these more isolated areas.

Medical care will continue as it is now until shortages hit the hospitals.  Shortages will eventually cause the citizens to alter lifestyles, and to improvise and adapt.  Times may get to be difficult, but they won’t be untenable.

Law enforcement may be supplemented with citizens.

In terms of sustainability, smaller populations tend to do better right out of the box.  But since most people live in the larger population centers, what are they to do?

Being able to stay in a large city through a breakdown will be extremely challenging.  It will require complete self-sufficiency for a prolonged period of time. This includes adequate food, water, warmth, and medicine.  Since urban life makes this type of lifestyle difficult, the next option is to go.

Bugging out is the common term.  But this really only works if people have some warning that trouble is indicated. You can pack up valuables and head for your Aunt’s house out in the boonies.  If however you wait too long to evacuate, you may get stuck in a massive exodus. So timing is crucial.

If you live in a smaller population center, the ease of survival increases as population decreases.  You may not have to adjust to too much.

Understanding how various sized cities will fare after a disaster can help you choose how to prepare based on where you live now, or in the future.