The 5 Stages of Societal Breakdown & Resilience 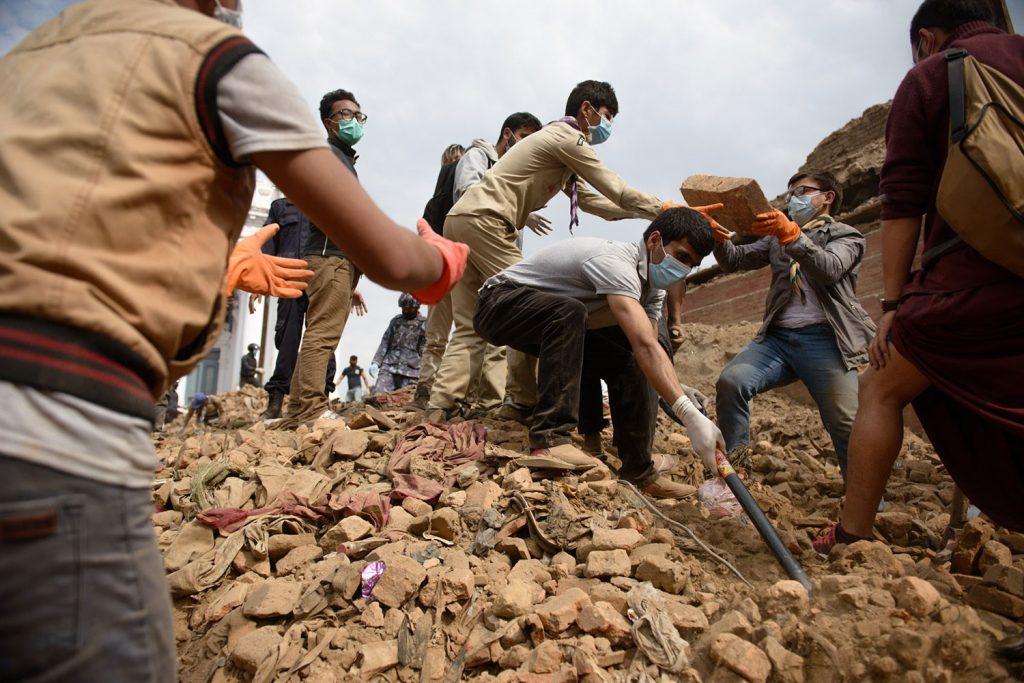 The 5 Stages of Societal Breakdown & Resilience

In 1989, while working at Apple Computer in Cupertino, CA, I felt the beginning sways of an earthquake. It was 5:17pm.  Having lived in the San Francisco Bay Area for many years, I imagined it to be a typical, smaller scale earthquake. But after about five seconds, I realized it was not like the others, and I scrambled under a desk for protection.  While lying on the floor, I felt the shaking intensify. And at one point, I felt the floor drop about two feet, like when an elevator stops too suddenly. Alarms activated, lights flickered, and I could hear equipment carts on the floor above me crashing to the ground.

In the prepper world, we would refer to the earthquake as “the event.”  What follows is referred to as “the aftermath.” People stood in the parking lot, stunned, some barefoot, and many without car keys or purses.  Within minutes someone put a large chain and padlock on the front door so people could not re-enter. The parking lot was packed with stranded people and vehicles. Luckily, I had picked that day to bike to work.

As I biked the 3 miles to home, it wasn’t initially apparent that the quake had done severe damage. Powerlines were down, and traffic was backed up for miles, but buildings looked intact. Turning on the TV, there was nothing but static.  A single channel with a live feed from a helicopter flying over San Francisco, was showing images of the Marina on fire, collapsed bridges and freeways. Two days later, most felt that we had dodged the promised “Big One” bullet, but that it was only a matter of time.

What about a catastrophic event:, the mega-quake that isolates LA, and sends a tsunami crashing into the city?  Or a super-emp, an electo-magnetic pulse, delivered via a North Korean missile, destroying large portions of our electrical grid?  How will people react to a major event when relief is weeks or months away? Or even years?

Assume a large natural disaster that affects a large area and that disrupts transportation systems so needed aid is not deliverable.

The event creates a disruption.  The aftermath includes the effects of disruption to communication systems, transportation systems, food delivery systems, emergency response and medical systems; all are disrupted.  Phones, cell towers, land lines all disrupted. Power is out. Train tracks are damaged, runways are fractured, and freeway overpasses and bridges collapse. Semis cannot deliver food.  Ambulances cannot transport patients to the hospitals. This aftermath will create predictable behavior in the people living in the urban environment. We will identify a 5-phase process to describe the accompanying human behavior. 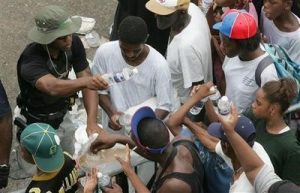 This phase is marked by a desire to assist those adversely affected by the event.  For example, if there are collapsed buildings due to an earthquake, people will form self-organized rescue parties to attempt to locate and rescue trapped people.  This is outside of official rescue efforts, and usually will continue until official government response arrives.

In the 1989 Loma Prieta earthquake, hundreds of those living in proximity of the Cypress Superstructure freeway near Oakland helped rescue those caught in the collapse.  Eventually, firefighters showed up and took over, but those local citizens were the true first responders.

The rule of law is still in place, though Law Enforcement response times will be slower than normal.  Priorities of LE will focus on immediate danger to life, therefore property crimes will be a low priority.

Within days, if no credible assistance has arrived,  mutual assistance gives way to the need to take care of self first.  If I had a few cases of bottled water at the time of the event, after two days of rescue work, and after I have given away one full case of water, I might start to think, “I better save the rest of these for my family in case we don’t get any resupply soon.”  So it is not uncooperative behavior as much as a decline in cooperation. 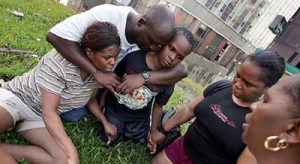 It is not apathy that drives this attitude as much as it is an increased concern about one’s own family.  So while continuing to help in limited ways, I am preserving my water for myself and my family.

The rule of law is still in place, however towards the end of this phase, events may start spiraling out of control of LE or they may be spread too thin to be effective.

In Haiti following the earthquake, there was a generally admirable response from most citizens.  However as time progressed and living conditions degraded, about five days in, a good friend who was working in a medical clinic, experienced an armed raid where their clinic was robbed of medical supplies.  This ushered in the beginning of the Anarchy phase. 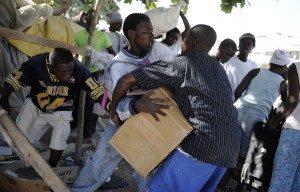 Threat of Violence: Increasing to high

A saying in the prepper community is that we are only 9 meals from anarchy.  However long it takes to happen, cities that experience a disruption in the delivery of goods and services will eventually descend into anarchy.  Food supplies will have run out, people will be hungry, and it will be every man for himself as people fan out in search of resources. Stores, especially food stores, will be cleaned out.  Muggings and strong-armed robberies will increase ten-fold.

This period will be marked by increasing violence as events spin out of LE’s ability to control.  Usually at some point, LEOs will go home to take care of their own families (as happened during Katrina with NOPD), and calls to 911 will go unanswered.  Once some elements realize that there is no longer rule of law, bad things will happen…in abundance. 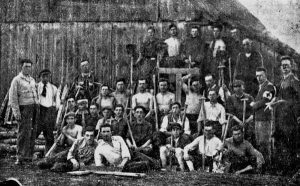 Time Frame/Duration; Tribalism will develop and continue to polarize people until rule of law is reintroduced by force.

Tribalism will, as the name implies, be the self-organization of groups, generally based on people who either look or act like each other.  If history is an indicator, those groups will tend to organize by race and socio-economic class. In some areas these groups are already formed.

LA County has a total population of approximately 10,000,000 people.  LEOs in LA county numbers approximately 22,000. The same area contains 180,000 known street gang members.  The street gangs are organized with clear command and control structures, weapons, and in some cases, military training.  Gangs will attempt to implement and enforce gangland justice.

In Peter Duffy’s book, The Bielski Brothers: The True Story of Three Men Who Defied the Nazis, Built a Village in the Forest, and Saved 1,200 Jews, he describes how the four Bielski brothers survived as fugitives deep in the forests of Belarus.  They started out with 13 people which grew to 40, and eventually to more than 1200, with the majority, 70%, being women, children, and the elderly. Over 100 artisans provided them with goods and services for the 3 years they spent escaping and evading the Nazis.

The brothers realized that their size gave them an advantage over several smaller camps that were too small to defend against marauders.  About 150 of the group trained and functioned as guards and soldiers. The irony being that their larger camp gave them a survival advantage because they could draw from a larger group with a wider variety of skills to provided them with adequate security, goods and services, while still allowing them to remain hidden and sequestered. 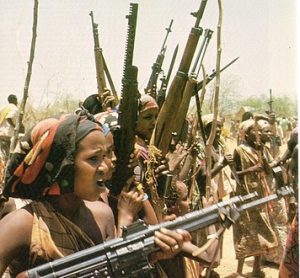 With time, the Tribal phase will evolve. Power will be consolidated into larger factions, determined by region, ruled by Warlords, who are direct competitors with a central state.  They may negotiate pacts with other warlords ,ie. leaders of the most powerful clans. People in their vicinity will fall under their control, not necessarily voluntarily.

Mogadishu, Somalia was dominated by warlords in 1992.  The power of the Warlord state was illustrated in the book Blackhawk Down by Mark Bowden, the story of our attempt to end the warlord structure there.

Some warlords were more organized than others and defied any attempt to relinquish power to a central authority. As Warlord Farrah Aidid was the most powerful,  the US sent in Delta Force and Rangers to deal with Aidid. US forces did not anticipate Aidid’s ability to organize resistance and the US paid dearly.

Decades later in Afghanistan, after learning this hard lesson,  a newly elected but weak central government decided it was more advantageous to cooperate with, rather than eliminate, the politically powerful and connected warlords throughout the regions of the country.

At some point, we hope some stabilizing force, be it National Guard, the Military, or less desirable, perhaps even a foreign government will attempt to establish order.  Forces will most likely occupy, impose martial law, and dismantle the power structure that formed in the vacuum. Constitutional law, with full rights, may not be restored. 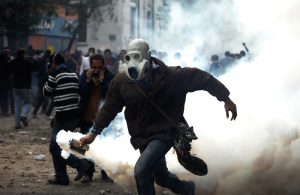 The “government-speak” for these events is a “loss of civility,” a euphemism for riots.  The first two phases we identified above, mutual aid and self preservation are generally greatly compressed.  We move almost directly into anarchy. Following the 1992 Rodney King verdict in LA, the amount of time before looting and rioting occurred was almost instantaneous.  And if no strong LEO/Government response occurs, this phase will eventually lead to tribalism where people self-organize for the economy of scale of protection in numbers.

Man-made events tend to be described in the media as a fuse set to a powder keg.  News commentators are always surprised at the violence of these actions, but social scientists are not.  They realize that the perception of injustice will incite people to act as a mob, to lose their individual identity to that of the mob.  When the momentum of a mob is activated, it is hard to stop. The rioting after the King verdict went on for five days before National Guard and LAPD were able to restore order.

Not all disasters follow these patterns, but many do.  There are many factors that affect the length and strength of the phases: Social intelligence, shared values, and population density are a few of the major factors that will determine the length and intensity of these events.

(This article is currently appearing in a special edition of American Survival Guide magazine called THE PREPPER FIELD MANUAL.   It is due to hit the shelves on the 24th of May but some places are already displaying it.)

Kevin Reeve is the founder of onPoint Tactical, llc, a pioneer in the field of Urban Survival and Urban Escape & Evasion. onPoint Tactical trains professionals and select civilians in Scout skills, Off-grid medicine, and more.  Visit us on FACEBOOK, TWITTER and website.